The ruins of Fort Connaught

Fort Connaught was built in 1878 by the British Army and was one of the four artillery batteries located on Sentosa Island, or Pulau Blankang Mati, as it was known then.

Built to defend Singapore from enemy invasion, it was completely destroyed by the British military the day before the Fall of Singapore on 15 February 1942. This was to prevent the weapon from getting into the hands of the invading Japanese Army.  From that day on, the fort was never ever rebuilt or re-used, and for all intent, abandoned and forgotten.

Fort Connaught was located at the eastern tip of Sentosa on the Serapong Ridge and comprised a battery of three huge 9.2" guns capable of hitting targets up to 25 km away. It was to protect the eastern seaward approach to Singapore.


During a recent visit to another nearby former military post called Berhala Reping on Sentosa, I was offered an opportunity to see the ruins of Fort Connaught.
I was aware that parts of the former fort grounds had been converted into a golf course. But I also knew that some ruins still existed, so this was an opportunity not to be missed!

Going into the forest to see the ruins is only for die-hard fanatics, or as in my case, being out in the sun for too long visiting Berhala Reping.
In fact, my companion Peter Chan who came along with me, expressed incredulity when after bashing through the undergrowth, getting scratched by thorns and bitten by ants and mosquitoes the size of elephants, he said..."What! we came all this way to see this pile of rocks ???" 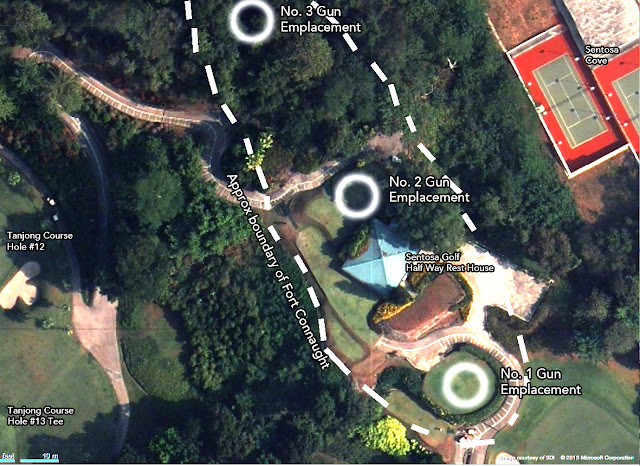 Of the former 3 gun positions on the hilltop of Fort Connaught, Gun Emplacements Nos. 1 & 2 were covered over on which the half-way rest house of the Sentosa Golf Club's Tanjong Course now lies.

The only visible remnant was Gun Emplacement No 3, but this was well-locked within the forest that grew around it after being abandoned 71 years ago.
Even though it lies less than a 100 metres into the forest, getting to it was difficult given that it is located on a hillside.

These photos show what remains. There was supposed to be an observation tower further on but due to the thick undergrowth, we could go no further than the gun platform itself.