It was an invitation out of the blues, from MINDEF no less!
“Would you be interested to visit a few old SAF camps that we are planning for a group of history bloggers?”

To say I was delighted would be an understatement, especially when they mentioned that it would include the Changi Murals and the old Selarang Barracks.

This event was specially organised for a small group of heritage bloggers that included my old friends, Lam Chun See (Good Morning Yesterday) and Peter Chan, online familiars like Jerome Lim (The Long and Winding Road), Char Lee (Second Shot), Mok Ly Ing (bukitbrown) and Andrew Him (One NorthExplorers). It also gave me the chance to meet other bloggers whom until then we had only known virtually online.

The visit began at the SAF Selarang Camp in Changi.
The Selarang complex was built in 1936 by the British forces and was then called Selarang Barracks. The Singapore Armed Forces took over the camp after 1971. The camp has been upgraded and modernized to SAF’s new requirements but sadly most of the original pre-war buildings had to be torn down as it was found unsafe or unsuitable for today needs.


During the Japanese Occupation from 1942 to 1945, Selarang Barracks was used as a POW internment camp to house the Allied soldiers captured in WW2.  Its notoriety was cemented during this period by an event known as the “Selarang Incident”

On 30 Aug 1942, four escaped POWs were recaptured by the Japanese.
The Japanese camp commander, Gen Fukuei, then demanded all POWs sign a declaration that they would not try to escape. This was in contravention of the Geneva Convention, so all the POWs refused to sign.

In retaliation, Gen Fukuei ordered all 15,400 POWS, mainly from the Australian Imperial Force, to be confined within the Barracks until they signed. Selarang Barracks could only house 1,200 men. Thus the majority spilled over into the Parade Square. As punishment, water and food were strictly rationed and there were no sanitary facilities available, even in the barrack buildings.
Seeing that the Allied soldiers were not budging by the 3rd day, Gen Fukuei had the 4 escapees publicly executed as an example.  He ordered that all the sick soldiers be brought from the hospitals and also confined to the Parade Square. On seeing that their men were starting to die of illnesses like dysentery, the British commanders permitted their soldiers to sign the declaration “under duress”. Thus ending the Selarang Incident on 5th  Sep 1942. 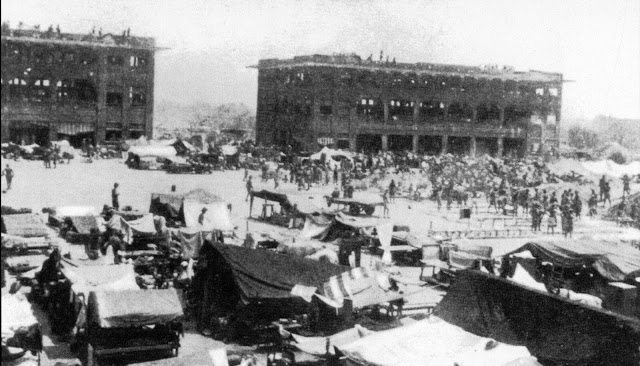 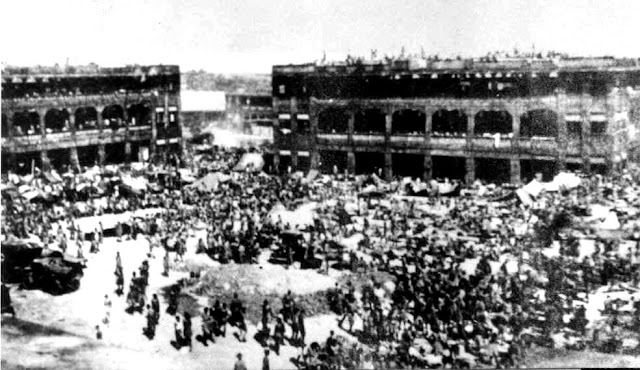 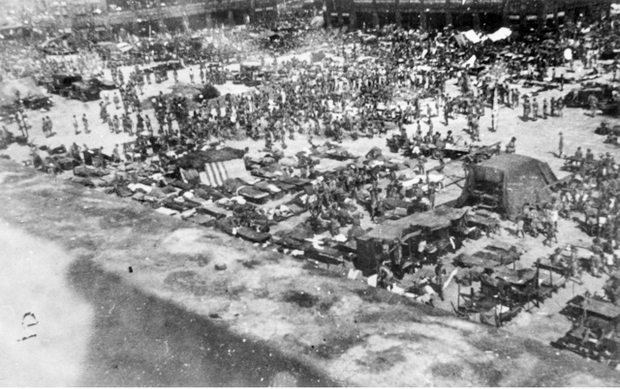 After the war, Gen Fukuei was tried at a war crimes tribunal and was sentenced to death by firing squad, specifically on the charge of ordering the 4 escapees executed. Ironically, he was executed on the very same spot where the four Allied soldiers were executed at Changi Beach.

For security reasons, we were not allowed to photograph any of the existing SAF facilities.
However, I have compiled some photographs taken at Selarang Barracks where we were allowed to.
The photographs are in my album here.

When the hospital superintendent discovered Warren's artistic talent, he requested that the walls of the St Luke's Chapel in the Dysentery Ward be painted by Bdr Warren. Stanley
Warren, despite being close to death at one stage, undertook the arduous task of painting the murals, despite lacking supplies like paints and brushes, which he managed to scrounge around to complete his task.

Five murals were completed by the time the war ended and Stanley Warren was released and returned to England. The murals were soon forgotten when the barracks were used for other military purposes. The murals were painted over with whitewash over time and one wall was even taken down to create a passageway destroying part of the hidden mural unknowingly.

Only in 1958, the significance of the murals were 're-discovered' and efforts were made to find the artist. Stanley Warren was located in London but was hesitant to return to Singapore to do a restoration due to the trauma he underwent during the war.

It was not until 1963 that he finally found courage to return to do a restoration of the five murals. He returned a further two times in 1968 and 1988 to finalise the restorations, of which only four could be completed. The final mural, which was partially damaged by the creation of a passageway, could not be done as hZtanley Warren didn't have a sketch of the original painting he titled "St Luke the physician in prison". When finally a sketch was discovered, Warren  was too frail to return again to Singapore and so he did a small oil paint facsimile of the work.

The original murals as discovered in 1958 before restoration. 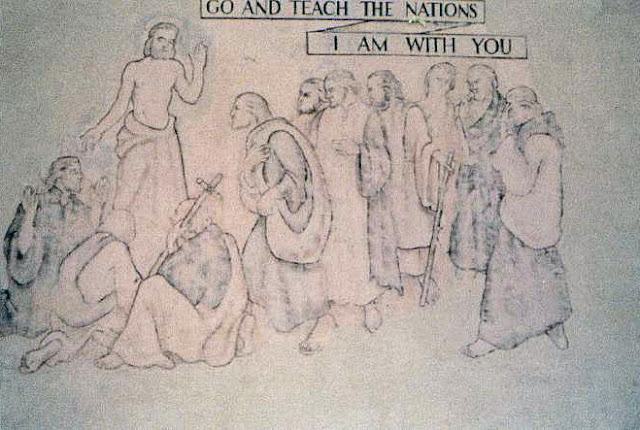 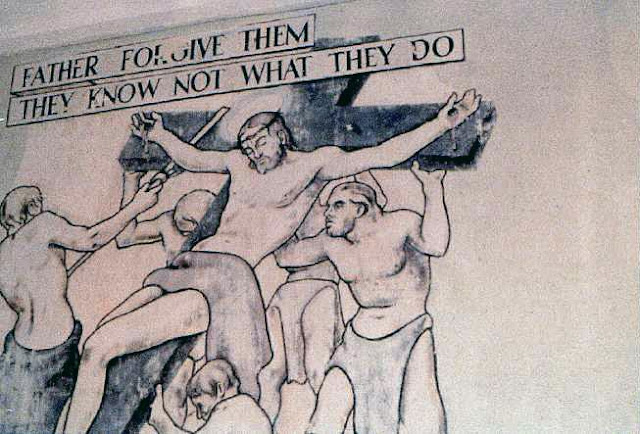 Today the restored murals are still housed in the original Chapel of St Luke in the old Roberts Barrack. The building, known as Block 151, the last remnant of Roberts Barracks, was kept intact due to the historical significance of these murals.
However, access to it is strictly controlled and even then, viewing is normally permitted only through a partitioned glass panel. This is to avoid contamination and degradation of the murals. 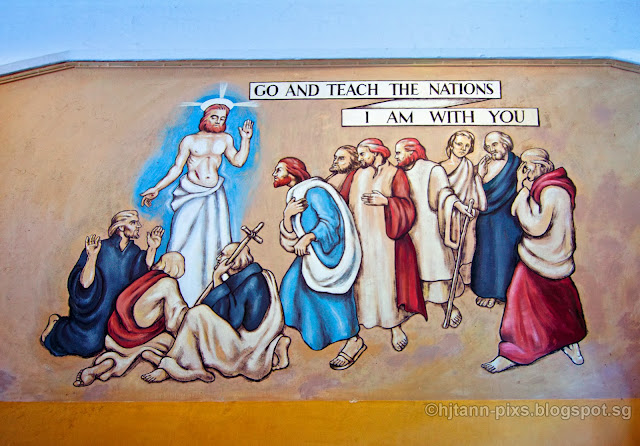 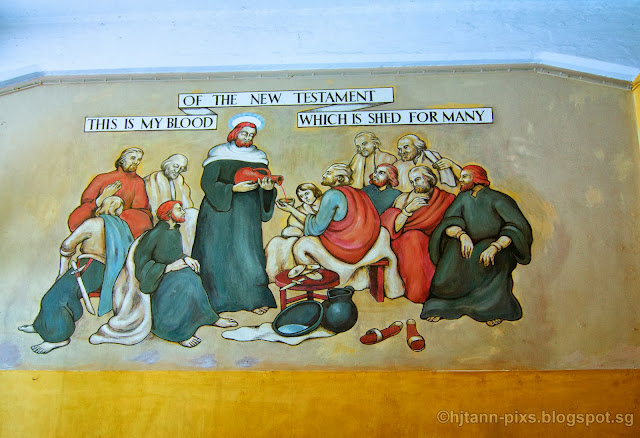 I was extremely lucky to have been able to enter the Chapel itself on this visit.
For a full photo display of the visit, please see my photo blog of the murals here.


Due to numerous requests to visit the murals, a replica of the Changi Murals was created at the new Changi Prison Museum and Chapel  located at Changi Road North just Selarang Barracks. The Changi Museum is open to public at no charge.


Old Changi Camp
The tour rounded off with a visit to the old Changi Camp, conducted by the Camp Chief, RSM Yip of Changi Airbase. It was very personal for me as I enlisted for NS and was based at Changi Camp as a recruit.

Seeing all the old buildings including the old Medical Centre brought a rush of memories back for me.
Sadly though, most of the old pre-war buildings that were around in my time are no longer there.